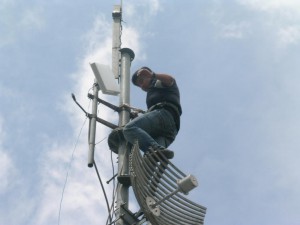 ISIF Asia is pleased to announce that five projects, including two from the Pacific Islands, will received AUD $30,000 to be implemented during 2015. The projects were selected after a very competitive process, with 166 applications from 23 economies submitted for evaluation. Seventy-three applications passed pre-screening and 32 were shortlisted. The quality of the applications and the technical expertise behind them, made the selection process particularly difficult this year.

In my role as Community Partnerships Specialist at APNIC, I am particularly pleased to see how the program is supporting projects in the Pacific, as improvement of the connectivity in the Pacific is something that has been discussed a lot, but very little practical research to design a strategy to actually make it happened has not been done. These two projects, one working to deploy a network using TV White Spaces in Vanuatu and another one focusing on research to design a peering strategy for the Pacific Islands, have really great potential to influence change in the Pacific, to influence policy, to increase the chances to improve connectivity in the islands, building on the experience gained by their supporting organizations and with strong industry partners.

Is not very often that ISIF Asia has the opportunity to support projects deployment technologies like TV White Spaces in such diverse locations -one in a remote island in the Pacific and the other one in the mountains of the Himalayas-, so we are looking forward to learning more about how these two networks will evolve and what their project teams will teach us, from the high mountains of Nepal to the outer islands of Vanuatu.

The 2015 grant recipients are:

For Least Developed Countries, qualified doctors for medical care are not available to the majority of the people who live in rural areas. Telemedicine systems offer a solution to this problem. The Department of Biomedical Physics & Technology of Dhaka University, has developed a PC-based telemedicine system with several diagnostic equipment like Stethoscope, ECG, Microscope, X-ray Viewbox, Colposcope, etc., integrated into the system at low cost, either designed and made by the group locally, or improvised from other types of available instruments. Coupled with standard audio-visual technology, these instruments have enhanced the capability of telemedicine for primary healthcare. Now the team plans to convert the existing system into a mobile phone based platform, using Android operating system for which this application is being made.

The islands of Vanuatu are spread across roughly 900km of ocean from top to bottom; the vast majority of these islands are to the North of the capital of Port Vila, while the islands of Eromango and Tanna to the south are disadvantaged by the expanse of ocean between them and the capital. Recently, in April 2014, Port Vila got a huge bridge across the digital divide with the connection of the first under-sea cable in Vanuatu. Along this connection into Port Vila, many of the islands to the north benefited as well due to the existing terrestrial microwave connection. The islands to the south however have been plagued with poor or no connectivity and still to this day, the even the government’s new iGov microwave network does not reach Eromango or Tanna.  Telsat Broadband is constantly looking for new, innovative and cost-effective ways with which to service rural and disconnected areas of Vanuatu to provide the communities there with access to the Internet and to the world. Through the use of an upcoming technology called TV White Space (TVWS), we are aiming to use the low frequency of this equipment to establish a long-range, stable link across the vast expanse of ocean between Port Vila and Eromango and connect these islands to the new submarine cable in Port Vila.

The proposed project is for building a long range hybrid wireless network in the villages near Manaslu Himalaya region of Nepal using Wi-Fi (2.4 GHz and 5.8 GHz) and TV White Space (472 MHz to 698 MHz) spectrum to bring broadband Internet for the villagers. So far E-Networking Research and Development has been using only Wi-Fi frequencies to build wireless network and to bring Internet in the rural areas by building P2P (Point to Point) and P2MP (Point to Multi-Point) wireless links. The reason why ENRD is proposing now to build a hybrid network with the combination of Wi-Fi and TVWS technology is we have assumed that such hybrid network would perform better and would make the network more robust than building the wireless network just by using Wi-Fi bands only. Thus ENRD wants to do a comparative study of Wi-Fi and TV White Space (TVWS) regarding their coverage, throughput, and performance. The reason for not using only the Wi-Fi band is that there are some limitations with only a Wi-Fi network, such as the need for clear line of sight (LOS), potential interference by the forest and cloudy weather, and less coverage. The proposed site is Nubri and Chun valley, located along the route to Manslu Peak (8,156m, or 26,759 ft), which is the 8th highest peak in the world. It takes six days walking to get to the region from the nearest highway. The network will provide Internet services for e-medicine in the community clinics and e-learning in community schools and Buddhist monasteries. It will also help to promote tourism in the region by providing Internet along the trekking trails and lodges by creating hotspots along the six day-long trekking trails. The Internet will also be used for trekkers’ tracking systems for the safety of the trekkers.

The ICARE project aims to offer timely pick-up and drop-back transportation to rural population in emergencies and adverse health situations for 100,000 rural citizens living in the pilot area of Odisha (India). Rural people often suffer from limited access to transportation to travel to health facilities. ICARE aims to provide more than 80% of rural beneficiaries in the project area with access to a vehicle in less than an hour to travel to health facilities. ICARE hopes to improve access by engaging vehicles available from local people and facilitate coordination through a call centre. ICARE, on the other hand, makes dynamic use of vehicles available in and around rural communities. According to the recent Census of India (2011), rural Odisha has some 75,185 four wheelers in some 8 million households, roughly one vehicle in every 106 households. In rural Odisha, there are 500 – 1,500 households in a village which has a radius of 3 – 8 km. Given this strength, ICARE proposes to engage the vehicle owners willing to volunteer their time and vehicles for a fee for a service. A call centre shall receive calls from health workers and beneficiaries requesting vehicles and the call centre would in turn call the vehicle owners who registered to volunteer their vehicles to check their availability. The call centre would then dispatch the nearest and willing vehicle owner to the provide pick up and drop by service. The vehicle owner can be reimbursed by the facility for transporting pregnant women, through the maternity transport reimbursement scheme of the government. For other health emergencies, beneficiaries or insurers can make the payment.

In the last decade, new fibre optic systems have linked islands throughout the Pacific. New Caledonia now connects to Australia. Tonga and Vanuatu each have cables to Fiji. French Polynesia and Samoa link to Hawaii. The Marshal Islands and Federated States of Micronesia now connect to Guam. Each new cable project has helped Pacific Islands connect to the Internet, but not to each other. More often than not, traffic between networks in the Pacific travels via Australia or the United States. This is the case even for networks servicing the same country. Such suboptimal routing results in poor performance and high costs for all parties. Establishing peering exchanges in the Pacific will improve the quality of latency-sensitive applications. Voice and video applications important to education and government will improve. Costs for local carriers and end users will fall. Reliance on multinational telecommunications carriers will lessen. Several projects to establish peering exchanges in the Pacific have faltered, while only one has succeeded. In some cases, telecommunications regulations or monopolies have erected barriers. In other cases terrestrial circuit pricing has made peering a poor financial choice for participants. A lack of understanding of peering by stakeholders is the only barrier in another case. This project seeks to produce a strategy that will get peering back on track in the Pacific. The strategy document will be informed by demand, network topologies, commercial relationships, monopolies, and government policies. It will highlight the potential benefits to all stakeholders, with a particular emphasis on research and education networks. In accessible language and with clear illustrations, the strategy will help stakeholders understand all sides of the arguments around peering, including those of reluctant incumbents. We hope its completion and presentation to the community will lead to new peering initiatives that will be highly beneficial to the Pacific region.

The grants for 2015 have also been sponsored by the Internet Society, the Dot Asia Organization, ICANN and APIA.

How Indonesians Are Protecting Voting Rights with Crowdsourcing

How Can Digital Innovations Improve the Economy of Bangladesh?