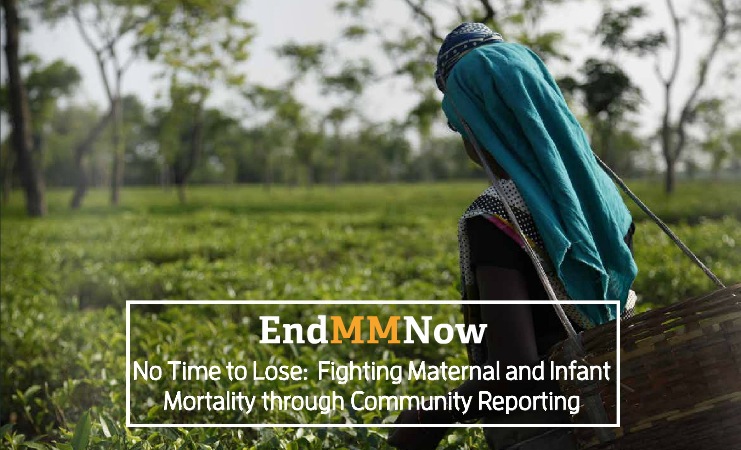 The state of Assam leads the country with the highest maternal mortality ratio (MMR), and one of the highest infant mortality ratios (IMR) in India. These health indicators persist despite the right to safe motherhood protected by the Indian Constitution and guaranteed under national laws and policies. The lack of data on the Adivasi community makes it particularly difficult to address some of the gaps in the implementation of maternal and infant health policies.

For this reason, Nazdeek, PAJHRA and ICAAD have developed the Project “End Maternal Mortality Now” (End MM Now). Launched in April 2014, the Project trained a group of 40 women volunteers living in Balipara and Dhekiajuli Blocks in the Sonitpur District of Assam to identify and report cases of health violations in their communities through SMS. The project has been implemented with the generous support of ISIF Asia.

A major outcome is the report, No Time to Lose: Fighting Maternal and Infant Mortality through Community Reporting. The report brings to light the obstacles that Adivasi women face in obtaining maternal health care in Assam – a state with the highest maternal mortality rate in India.

No Time to Lose is the first attempt in India to collect and map cases of maternal and infant health violations reported by women living in tea gardens through SMS technology. Based on nearly 70 cases reported by community members who participated in the Project, the report offers tangible recommendations for Block and District level health authorities and tea garden management to improve service delivery and save mothers’ and infants’ lives.

“For the first time, civil society in Assam can rely on solid data on the lack of access to maternal health services. Thanks to this data, we have formulated key recommendations to curb the appalling number of maternal deaths among Adivasi women.” – says Barnabas Kindo, from Pajhra.

No Time to Lose identified a significant gap between patients and healthcare providers. Key recommendations include the immediate appointment of a hematologist for the Dhekiajuli Community Health Centre, and the establishment of a more efficient referral system.

“End MM Now has proven to be an invaluable platform for women to monitor and claim access to basic rights and entitlements. Community members have already noted initial positive changes in the delivery of health services”, says Francesca Feruglio, from Nazdeek.

“Shaped by the idea of crowdsourcing, End MM Now maps and visualizes ground-level data, which is verified and made available to the public and the government. This way, the platform bridges an existing information gap and increases transparency in the delivery of health services,” says Jaspreet K. Singh, from ICAAD.