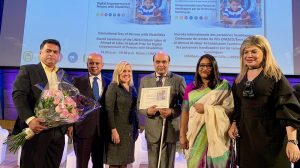 Vashkar Bhattacharjee of YPSA Bangladesh, ISIF Asia 2014 Award winner, has been awarded UNESCO/Emir Al Ahmad al Jaber Prize for Digital Empowerment of Persons with Disabilities 2018 at UNESCO, Paris, France on Monday, 3 December 2018. This Global prize was given to him in recognition of his outstanding contribution to the empowerment of persons with disabilities through the application of ICT to access information and knowledge. This is the first time a Bangladeshi has received the prestigious award, according to press release of Bangladesh Embassy. Vashkar’s project introduction can be found on ISIF Asia website here 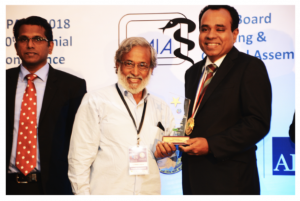 At the 3rd Commonwealth Digital Health Awards 2018 held at Colombo on 12 October, ISIF Asia 2015 Grantee – ‘Telemedicine Program’ of Dhaka University won the Award in Telemedicine category for their outstanding contribution to develop healthcare quality in rural areas of Bangladesh. Director of the program, Dr. Khondkar Siddique-e Rabbani, received the award on behalf of DU. The Telemedicine Program is being conducted by the Department of Biomedical Physics and Technology of Dhaka University. They developed low-cost Telemedicine systems with diagnostic equipment to facilitate the healthcare in low-resource rural areas in Bangladesh. Refer to their technical report on ISIF Asia website here to know more about their outstanding project.

Support ISIF Asia to win one of the WSIS Prizes 2019 on International and Regional Cooperation: Vote by 10 February!

On International Women’s Day, calling for gender empowerment and innovation initiatives to apply to ISIF Asia