Saifuddin Rafi, one of the four million visually impaired people in Bangladesh, is studying in class XI at Patiya Government College in Chittagong. His study started in a specialized school (Government Muradpur School for the Blind) in Chittagong. But, after completing primary level, he got admitted into ‘Union Krishi School and College’ in Patiya nearby his home town. During his secondary education level, in this mainstream school, he did not get textbooks in Braille or accessible audio format. He had to traverse jumpy situations due to absence of accessible study materials.

These difficulties required support from his sister, also a student with her own burden, who assisted him by recording all the books and class notes. The sufferings of his parents were also countless. A child with visual impairment needs extra privileges for continuing education; but the access to study materials required and their affordability is perplexing. Therefore, parents wishing their children to continue their studies face physical, mental and financial stresses.

For Rafi, difficulties to get accessible study materials needed for visually impaired students was a major challenge, and it troubled him and his family till class VIII. While studying in class IX, he received textbooks in audio format. Later he came to know that these were called DAISY-standard digital talking books.

The digital talking books are accessible materials which provide the text in an audio version for all including students with print and learning disabilities. Digital talking books are for everyone who needs accessible information; readers can play the audio and simultaneously display and highlight the corresponding text. It eases the education for the number of visually impaired students in Bangladesh like Rafi.

A team of persons with disabilities developed DAISY standard digital multimedia books, e-books and digital braille books for the primary and secondary levels using open source technology which are freely available for the end user. The project received technical support from DAISY Consortium, Accessible Books Consortium and WIPO, while receiving implementation support from Young Power in Social (YPSA) and overall support from the Service Innovation Fund of the Access to Information (a2i) programme under the Prime Minister’s Office in Bangladesh. The project has converted all primary and secondary education textbooks (grades I through X) into cost effective DAISY digital multimedia format; made it easier to produce braille, text, audio book or e-book as suitable.

These accessible and affordable reading materials brought a momentous shift in Rafi’s learning curve. Through receiving Grade Point Average (GPA) 5, the highest grade obtainable for secondary and higher secondary education system in Bangladesh, in his Secondary School Certificate (SSC) examination, Rafi has created an example for other visually impaired students who are struggling for their study fighting against their disabilities.

This project has won multiple awards for developing these multimedia talking books, for the expansion of the accessibility of digital publications with innovative models and practices. The most remarkable awards include the World Summit on the Information Society (WSIS) Prize, 2017; the Zero Projects Award on Inclusive Education (2016); the Accessible Books Consortium Award for Accessible Publishing Initiative at the International Excellence Award 2015 held in London Book Fair; etc. 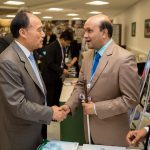 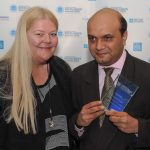 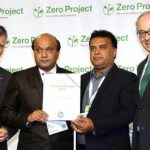 Among them the Information Society Innovation Fund (ISIF Asia) Award, 2014 was the first prestigious international recognition for the digital talking book project and greatly inspired the team behind the project. These funds and awards actually made the ground more secure for further efforts and development in creating accessibility for all in
education.

Surely, these appreciations are significant as both stimulus and outcome of the project. Yet, the main purpose of the project was to enable the students and people with various disabilities. So, the outcome should be measured by the aid, reduction of hassle and indicators of success of the beneficiaries. More than 100,000 students with visual disability, print disability and learning disability can now read and listen to their textbooks that significantly improve their learning now.

The Access to Information (a2i) programme is continuously working on accessible education for the visually impaired. Low-cost digital braille display and low-cost DAISY multimedia book players are being developed locally to read these DAISY digital talking books. Bangladesh wants to make people with disabilities resilient rather than ‘assumed liability’ of the society. Ensuring inclusion of all including people with disabilities, especially in education, will aid human-centric and sustainable development of Bangladesh.

The education and life as a whole for Rafi and his family, representative of thousands of beneficiary households, has become much easier these days. Rafi can use either smartphone or computer to access his reading materials. 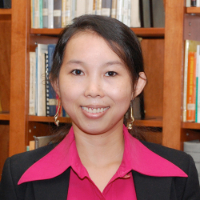 When Treng Kuy Chheng looks back at her past, she wonders what she would be doing, had she not met Digital Divide Data (DDD), a non-profit organization whose goal is to empower Cambodia’s youth through digital training and employment.

Being Disabled in Cambodia

Chheng was born into poverty, and to make things worse she had polio when she was two. She survived but her illness left her with physical impairment and bleak prospects for the future.

Being disabled in Cambodia is often perceived as a tragedy and, among the estimated 700,000 Cambodians who are afflicted with disabilities, it is true that the majority do not fully enjoy their fundamental rights, and they often do not have equal opportunities for education or employment.

Chheng was rather lucky as her parents did not treat her differently from her siblings. In the morning she would sell vegetables at the family’s food stall; and in the afternoon she would go to school. However hard it may have been, it made Chheng believe in herself and her abilities. And the more the neighbors would stigmatize, pity or even discourage her, the more determined she was to succeed in life and not be a burden to her relatives.

This determination gave her the strength to look for employment after she graduated from high school. At the time, the economy was beginning to recover slowly, and landing the first job was very hard for everyone. For a disabled girl like Chheng, it was even more difficult, and, while she was searching for a professional opportunity, she experienced stigma, rejection, and discrimination. Before she started losing hope, she had the chance to meet with Digital Divide Data, which had been co-founded two years earlier by Jeremy Hockenstein.

In 2000, this young American traveled to Cambodia as a tourist. During his stay, he was not only struck by the level of poverty in the country; he was also impressed by the eagerness of the youth to learn and struggle to build up a better life. They would take computer and English lessons but in the end there was no job for them and they kept being trapped in an endless cycle of poverty.

In the meanwhile, the world was going global, and international companies started outsourcing low-skilled IT jobs to India. Hockenstein was a business consultant at McKinsey, and it did not take him long to figure out that he could replicate this model in Cambodia and use it to promote employment and empowerment for the disadvantaged youth.

When she joined Digital Divide Data in 2003, Chheng had hardly seen a computer in her life. She had to learn everything from scratch, but she worked hard and soon she knew how to turn a computer on, enter data and master fast typing. She was also trained in English and soft skills (e.g., team work, self-confidence, management). After six months, she was fully operational and became one of DDD’s data operators.

For four years, she worked six hours a day to transform physical documents into searchable and digitalized archives for publishers, libraries, and companies all around the world. For her work she was paid a fair wage but she was also granted a scholarship to study at Pannasastra University, one of Phnom Penh’s best universities.

A Stepping Stone to a Brighter Future

With 400 employees, Digital Divide Data is today the largest technology employer in Cambodia, and in the past 13 years its impact sourcing model has had a transformative effect on nearly 2,000 underprivileged young adults, 10 percent of them being disabled.

Working at DDD is always a stepping stone to a brighter future. After they complete the program, graduates are either hired by the organization or they move on to other companies, where they earn more than four times Cambodian average salary. With this money, they can support their parents and enable their youngest siblings to get a proper education. In the long run they break the cycle of poverty that has trapped their family for generations.

As for Chheng, she has managed to make all her dreams come true. She wanted to study; she now holds a Bachelor’s degree in accounting and an executive MBA. She wanted to have a job; she started as an accountant at DDD and for the past year she has served as the finance and administration manager of a large electronic company. She wanted to see the world; in 2013, she went to Canada to participate in the Global Change Leaders program.

At 29, this highly successful woman keeps having new dreams! Today she wants to change the public’s attitude towards persons with disabilities and create real job opportunities for them. She believes they have the ability; they just do it in a different way. Just like her.

Daniele Adler is a consultant in communications strategy in Cambodia