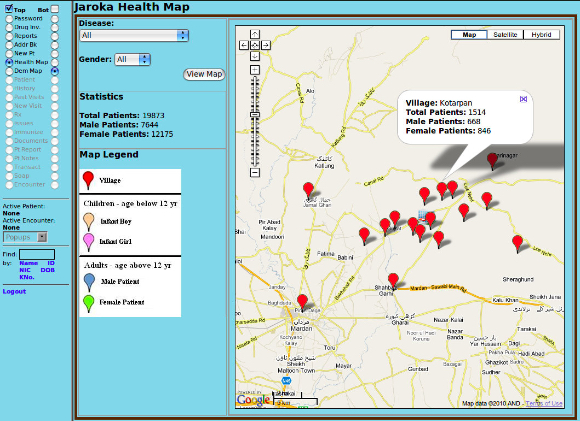 For a nation whose healthcare system is chronically underfunded, Pakistan is all too familiar with disaster. In 2005, a magnitude 7.6 earthquake ravaged the country, killing over 79,000 people. In 2010, heavy monsoon rains triggered massive flooding which destroyed almost 2 million homes, yet Pakistan’s health expenditure that year was just 1% of its GDP. There simply aren’t enough medical personnel in Pakistan to meet demand during times of peace, let alone emergency situations. There are some estimates that up 70% of Pakistanis don’t see a doctor in their entire lifetime.

The UM Healthcare Trust, a hospital facility located in rural Mardan, has developed an mHealth system intended to connect rural Pakistanis with the both the daily and disaster healthcare that they need. The system, called Jaroka Tele-healthcare, was developed in tandem with Stanford University. Jaroka directly connects healthcare providers at the Mardan facility to specialists in Pakistan’s urban centers, as well as the United States. This connection allows for specialist review of complex cases without forcing the patient to travel.

Jaroka incorporates an Electronic Medical Record (EMR) into the UM Healthcare Trust system. The EMR allows all medical information, including all records, vital signs, prescriptions, and lab reports to be stored and managed online. These records can be readily accessed when consulting a specialist, or by a healthcare worker in the field.

While there are very few trained doctors and nurses in Pakistan, there are over 110,000 Lady Health Workers (LHWs). LHWs are trained to provide preventative and curative health services to their neighbors, while using their peer status to navigate local customs and languages effectively. Utilizing Jaroka’s SMS enabled features, the LHWs can add new patients to the system, update disease records, search for patients via unique ID’s, retrieve patient history, and access a dictionary of terms. Prior to Jaroka, these capabilities were restricted to the hospital.

Quality care provided by LHWs reduces one of the largest barriers in the Pakistani healthcare system: cost. There is no national health insurance in Pakistan, and 78% of the population pay for their own medical expenses. With over half of Pakistan’s population living under the poverty line, low cost (or free) care provided by LHWs is the only option available. The tools Jaroka provides, used in combination with LHWs peer status, allow them to be efficient intermediaries between the community and the traditional healthcare system.

These intermediaries are even more critical during times of disaster, when the disconnect between hospitals and rural Pakistanis is magnified. One of Jaroka’s key features is a GIS mapping system which allows doctors to track the spread and incidence of diseases in real time. The disease data is received from LHWs in the field who send SMS updates for patients into the Jaroka Electronic Medical Record. From there it is uploaded into a Google Map, allowing real-time tracking. In a disaster scenario, this tool allows doctors to direct resources to areas with the most critical demand.

The value of Jaroka’s regional disease monitoring capability carries directly over into daily healthcare practice. Pakistan is currently battling a Polio crisis, and ranks fifth in the world for Tuberculosis disease burden. Jaroka provides the UM Health System with the capability to monitor disease trends in the Mardan region, and allocate resources to prevent outbreaks from turning into epidemics.