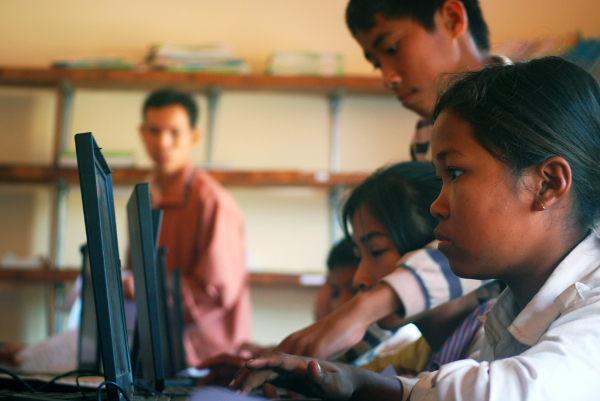 On June 26, 2014, Cambodia’s MPs approved the National Strategic Development Plan (NSDP) for 2014-2018. This ambitious document is the country’s blueprint for economic policy, and since it contains a full section dedicated to ICTs, this is a good opportunity to take stock of the current state of this increasingly strategic sector.

1. Why has Cambodia made the development of ICTs a priority?

Simply because ICTs can have a transformational impact and pave the way to Cambodia’s sustainable development. They can boost the economy both in the short and longer run. In 2009, the World Bank showed that using ICTs enable companies to increase their productivity but also that a 10 percent increase in the Internet penetration can contribute to 1.38 percent of GDP growth. On top of these economic benefits, ICTs can also improve the life of the most disadvantaged by granting them a better access to basic services.

2. How is the Cambodian ICT sector doing?

There is a paradox. Traditional information and communication services are of poor quality. Public postal services are unreliable; mass media do not reach 15 percent of the Cambodians; and only 3.96 percent have a fixed phone line. When you look closer, though, the picture is different. It turns out that Cambodia has been closing its technological gap by moving straight to mobile and Internet. In 2008, 3.8 million people had a cell phone; in 2014, there are 20.2 million SIM cards in circulation, which is a 130 percent penetration rate (regional average rate reaching 89 percent).

The Internet sector is also doing well. Six years ago, fewer than 10,000 Cambodians had a web connection, and it was extremely slow. Today 2.5 million people have Internet access at home, and an additional two million Cambodians go online daily using their smartphones.

3. How to explain this leapfrogging development?

There are two main reasons. First, the coverage is good in most regions, and this is because both the public and private players have invested in the telecom infrastructures — up to $209 million by 2015. Moreover, in the past decade, Cambodia has experienced a 7-8 percent economic growth per year. As a consequence, standards of living have risen, and the emergence of a middle class has attracted many operators. With the competition being fierce, both mobile and Internet subscription prices have been reduced.

4. To which extent have ICTs impacted the Cambodian society?

It took only a few years, but ICTs have already transformed the Cambodian society. On the economic level, they have boosted entrepreneurship: 2011 census showed that the tech industry was among the fastest growing in Cambodia. Moreover, ICTs have had a positive impact on other economic sectors, such as agriculture. In central Cambodia, for instance, Oxfam has been implementing an “e-agriculture” program. By providing rural women with a mobile phone, they have given them a tool to plan when to harvest, integrate with the national market and eventually increase their revenues.

On the social level, ICTs have proven they can be impactful as well, in particular by expanding the access to basic services. In 2014, for example, Women’s Media Center of Cambodia launched a radio show in order to promote maternal care in the countryside. To make sure they reach everyone, they decided to develop an Interactive Voice Response system. And it has worked: in only three months 4,500 people called to get information.

However, the most striking impact has been political as ICTs have helped further strengthen the Cambodian democracy. During the 2013 elections, many voters would check Facebook and YouTube to get not-censored reports. Despite some irregularities, the opposition party obtained 44 percent of the votes. Eventually, Cambodia’s Prime Minister who has been incumbent since 1985 had to agree to share some of its power.

5. Which challenges will the Cambodian ICT sector be facing in the coming years?

Among the many challenges, two stand out in the short run. First there is no consistent legal framework, which affects the industry as a whole. In September 2012, the government established the Telecom Regulator of Cambodia. However, since the Telecom Law has not been passed yet, the rules rely on a collection of somehow volatile and often flouted decrees. The second challenge lies in the current market saturation. In a country of only 15 million people, there are seven mobile companies and 24 Internet operators. Since Cambodians have no brand loyalty, experts believe the market will have to restructure soon, and this may cause some business turbulence in the coming years.