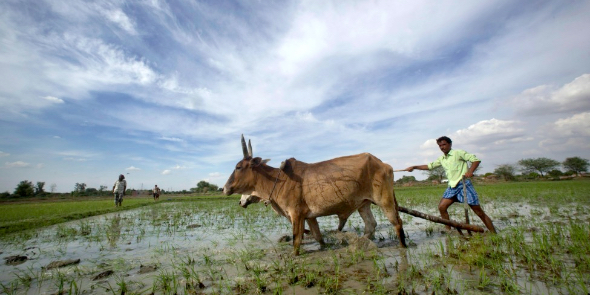 For the past decades, the share of agriculture in the Indian economy has kept shrinking. Even though the sector now accounts for 17.4 percent of the country’s GDP, it still employs 263 million people. That is, 22 percent of the Indian workforce.

Since the Green Revolution in the 1960s, India’s production of food grain has increased fivefold. The country is now self-sufficient, but it is facing a major productivity issue. It is still far below that of China, Brazil, or the United States.

This situation is the result of several factors:

Anand Babu C. and Shita Lotivakari are well-aware of the situation: their own parents were farmers. But after working for ten years for international companies, they also understand the potential of ICTs to improve the life of small farmers in the long run.

In India mobile phone penetration is up to 90 percent. More than 900 million people have a mobile phone, and an increasing number is switching to smartphones. In the countryside in particular, the mobile revolution has already had a great impact. Rural Indians can more easily communicate with their relatives living in the cities, and they have an increased access to the outer world.

For Anand and Shita, they can also play a major role in boosting agricultural productivity. In fact their dream is to leverage mobile technology to fill the information gap, which they think prevents farmers from improving their practices. That’s why the two entrepreneurs started Jayalaxmi Agro Tech in September 2014.

Anand and Shita’s idea was to build on existing services. In India, several companies already provide weather forecasts and market prices to farmers. The problem is that they do it using text messages in English. Since most small farmers are illiterate, these services are not so much of a help.

The two entrepreneurs thought through this illiteracy issue over and over, and they reached two conclusions. They agreed that using mobile phones to provide appropriate and timely crop-specific information is a great idea. But it is critical to develop easy-to-understand content; otherwise farmers will not use it.

Anand and Shita boldly decided to go for a mobile application. This is, indeed, the most appropriate solution for farmers. With an app, they can offer them both audio and visual content in English and several regional languages. And everything is available offline.

So far, Anand and Shita have developed 30 applications for agriculture, horticulture, and animal husbandry. Today Jayalaxmi Agro Tech’s applications provide information about specific crops (e.g., banana, pomegranate, potato, onion, etc.) as well as dairy farming and sheep rearing. Each of these apps aims at helping farmers to better manage their farm and boost their productivity.

So what does happen when a farmer downloads the banana app on his smartphone? First, he gets information about the existing varieties. He learns where bananas should grow and how he should irrigate them. He also receives reminders on when to apply fertilizers. He is even taught how to control the diseases through a decision support system. The whole content is illustrated with pictures and descriptions in his mother tongue. So it is easy for him to understand and apply even complex notions.

In only eight months, more than 50,000 farmers have uploaded Jayalaxmi Agro Tech’s apps onto their smartphones. And since all these applications promote sustainable practices, they may pave the way for a new agricultural revolution in India!