ISIF Asia was established officially launched in 2008, as a partnership between APNIC, the Internet Society and the International Development Research Centre (IDRC).Over the years, a number of sponsors have supported the program.

ISIF Asia funding categories are reviewed annually, through input provided by surveys where applicants and recipients are encouraged to apply, as well as feedback from the Selection Committee members and funding partners. The ISIF Asia program has conducted a series of internal review and evaluation processes and lessons learned have been incorporated every year into its programming.

Up until December 2022, ISIF Asia has supported 121 grants and 31 awards allocating over USD 7.43 million to 152 innovative initiatives across 31 economies. ISIF Asia has received 1898 funding applications across a variety of topics around Inclusion, Infrastructure and Knowledge. Final reports from grant recipients are available under a Creative Commons License.

The International Development Research Centre (IDRC) PAN Asia Networking initiative has supported small grants programs since 1997 under different program structures. The first phase was from 1997-2001 when the IDRC PAN (Pan Asia Networking) R&D Grants program was established as a competitive grants scheme for ICT R&D activities in the developing countries of the Asia-Pacific region that supported 25 projects totalling CAD 1.5 million.

A second phase was launched in 2001 as the "ICT R&D Grants Programme for Asia and the Pacific", as a funding partnership with the Asia Pacific Development Information Program (APDIP), the Asia Pacific Network Information Centre (APNIC) and the Asian Media Information and Communication Centre (AMIC). Later on, AMIC served as the program administrator under separate IDRC funding along with APNIC, Internet Society and Microsoft. This phase ended in 2005 and through its lifecycle received a total of 642 project proposals from over 30 AP economies, and awarded 56 separate grants. A Learning Forum for past grant recipients provided feedback for ISIF Asia's future development and served as the base for evaluation.

A third phase of the small grants program started with the ISIF Asia launch in 2008 under a new funding partnership between IDRC, ISOC, and APNIC, with additional support from the DotAsia organization.

An external evaluation was commissioned by IDRC in late 2014.

IDRC provided funding support to ISIF Asia until 2019 but continues to be a member of its Steering Committee as a founding member.

In October 2012, the Swedish International Development Agency (Sida) joined the program and provided funding until 2017. The Sida funding was managed by APNIC for all three programs.

APNIC continued to contribute financially to the program and supported its operational expenses until 2021 but continues to be a strong partner and supporter. Staff from IDRC, APNIC, AFRINIC and LACNIC meet after the
IGF in Nairobi in 2011 to finalize the planning for the launch of the
Seed Alliance under a grant that covered 2012-2015 activities.

About the Seed Alliance: a global south Internet for development funding partnership

The Seed Alliance was a collaborative partnership between the FIRE Africa, FRIDA and ISIF Asia Grants and Awards programs and various funding partners and sponsors that operated between 2012 and 2017 and supported 185 projects in 61 economies in the global south.

Thanks to contributions from IDRC, Sida and various regional sponsors, these programs supported innovation on Internet development across the global south -software tools, devices, research outcomes- that make strategic use of Internet technologies in an innovative way.

The Seed Alliance offered Grants & Awards; mentoring and coaching; and networking opportunities and allocated around US$ 5.1 million of funding throughout Africa, Asia Pacific, and Latin America.

The website includes a series of interactive diagrams to explain the Results Assessment Framework and Score Cards were structured for each project to outlined their performance against the evaluation criteria. APNIC managed a series of grants from IDRC negotiated for 2 to 3 years cycles, that provided additional funding for small grants and capacity building activities. Funding from Internet Society and other technical community organizations such as Dot Asia, APIA and ICANN also allowed the program to expand its activities.

In October 2012, the Swedish International Development Agency (Sida) joined the program and provided funding until 2017. The Sida funding was managed by APNIC for all three programs.

APNIC continued to contribute financially to the program and supported its operational expenses until 2021 but continues to be a strong partner and supporter. 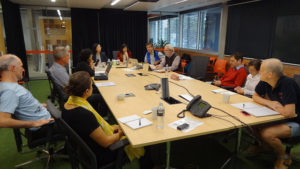 APNIC senior management and staff at a planning and programming workshop
for the 2013-2015 evaluation framework.